It is important to be aware of how to prevent Black Widow Spider in your everyday life. Pests need food, water, and shelter. Often, the problem may be solved just by removing these key items. We at Servitix have the experience and expertise to keep your family free from pests using safe and efficacious methodologies. 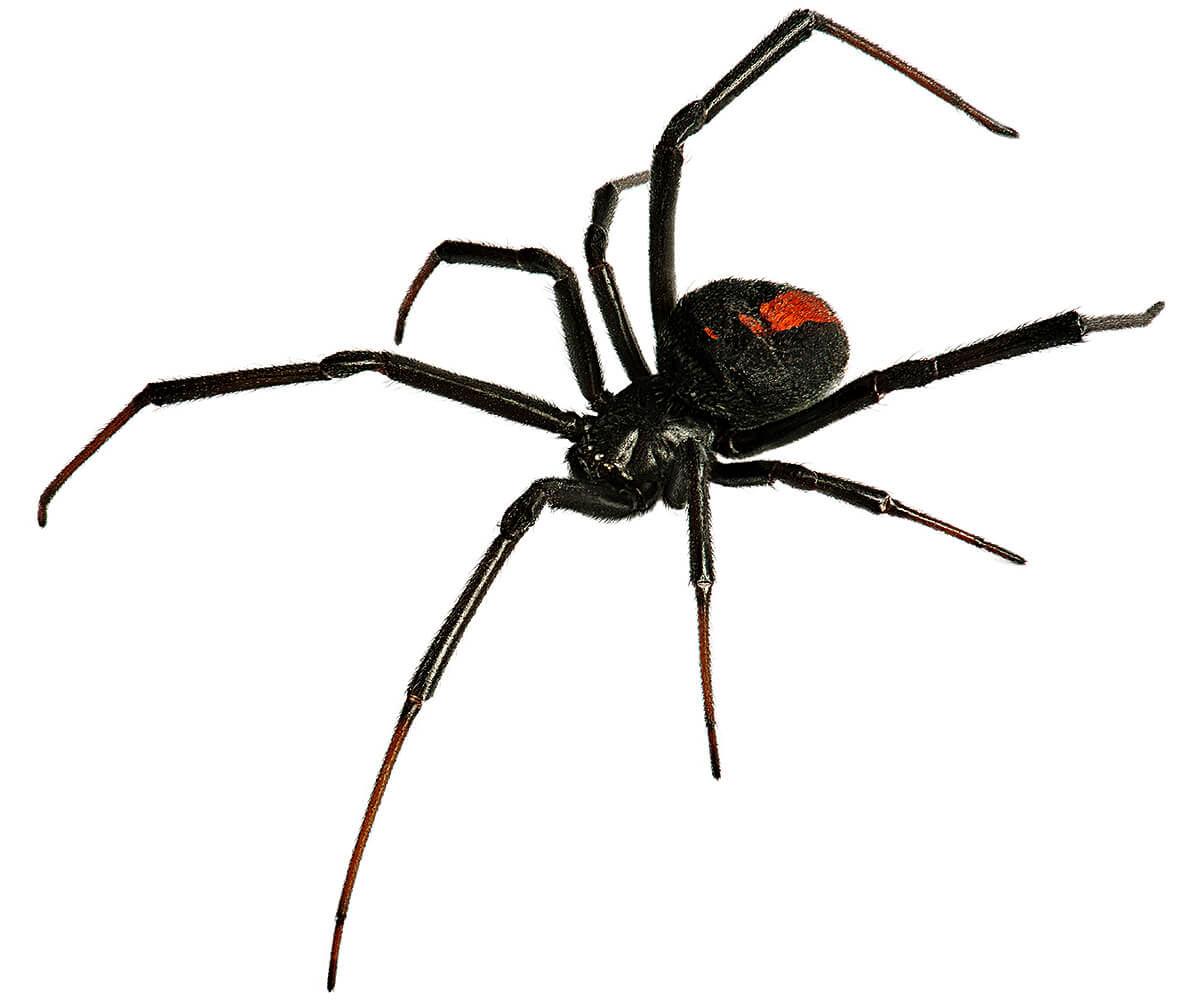 Body may be up to 3/4-inch in length with the abdomen reaching 3/8-inch in diameter.

Shiny black with red hourglass on underside of abdomen.

The webs are frequently constructed underneath boards, stones, or the seats of outdoor privies. They also found along foundation slabs, behind shrubs, and especially where brick or wood siding extends close to ground level. This spider does not usually enter residence, though it may do so occasionally.

Sedentary, solitary, cannibalistic, and nocturnal. The only social life it exhibits is when it mates. During the daylight hours, this spider spends its time in the silken tunnel of its web, which is the core of the snare. The female black widow spider hangs upside down in her web; her red hourglass marking is a visible warning signal. This spider will drop out of its web at the slightest disturbance and pretend that it is dead. The female black widow is usually clumsy when she is not in intimate contact with the lines of her snare. Latrodectus mactans is a tangled web weaver. Its irregular, funnel-shaped web of coarse silk has a definite plan. Three structural levels can be recognized: an uppermost complex of supporting threads, a central zone of tangle threads, and a lower zone of vertical trap threads. Also, the black widow spider is greatly active in the autumn months and its web is spread over everything. In addition, most of these spiders live only a year, but the yearly population is divided into two faunas, one identified with spring and the second with fall.

Ordinarily it feeds on insects; however, it also consumes wood lice, diplopods, chilopods and other arachnids.

Black widow spider venom contains toxins that are neurotoxin (toxic to the nervous system). The severity of a person’s reaction to the bite depends on the area of the body where the bite occurs; the person’s size and general sensitivity; the amount of venom injected; the depth of bite; the seasonal changes in venom potency; and the temperature. The bite produces a sharp pain similar to a needle puncture, which usually disappear rapidly. After a variety of other symptoms, convulsions and death may result with some victims, especially if the person is sensitive to the venom and no treatment is received. An antivenom specific for the black widow is readily available to most physicians.

Protects Your Business And Your Reputation

Our exterminators are skilled, professional, and ethical, and are all trained to address each of your residential pest questions and concerns. We focus on treating the bugs outside of your home, and stopping them before they can get inside, reducing the number of treatments needed inside your home.

Servitix Pest Control provides comprehensive solutions for every pest that invade your business. When you partner with our highly qualified team of licensed pest professionals, we custom fit every commercial pest management solution to your specific business needs to ensure your facility remains pest-free.

It is all part of our 100% Satisfaction Guarantee

Get Your Service Special Today

Get a free no obligation quote from Servitix Pest Control.

Having a Staff Entomologist SERVITIX have a unique insight into the habits of many insects which enables us to develop effective treatment options to keep them away from your property.

Since 2003 Servitix Pest Control has been serving the Metro Atlanta and Vicinity.

At Servitix Pest Control we always show up on time and response within 24 to 72 hr.’s.